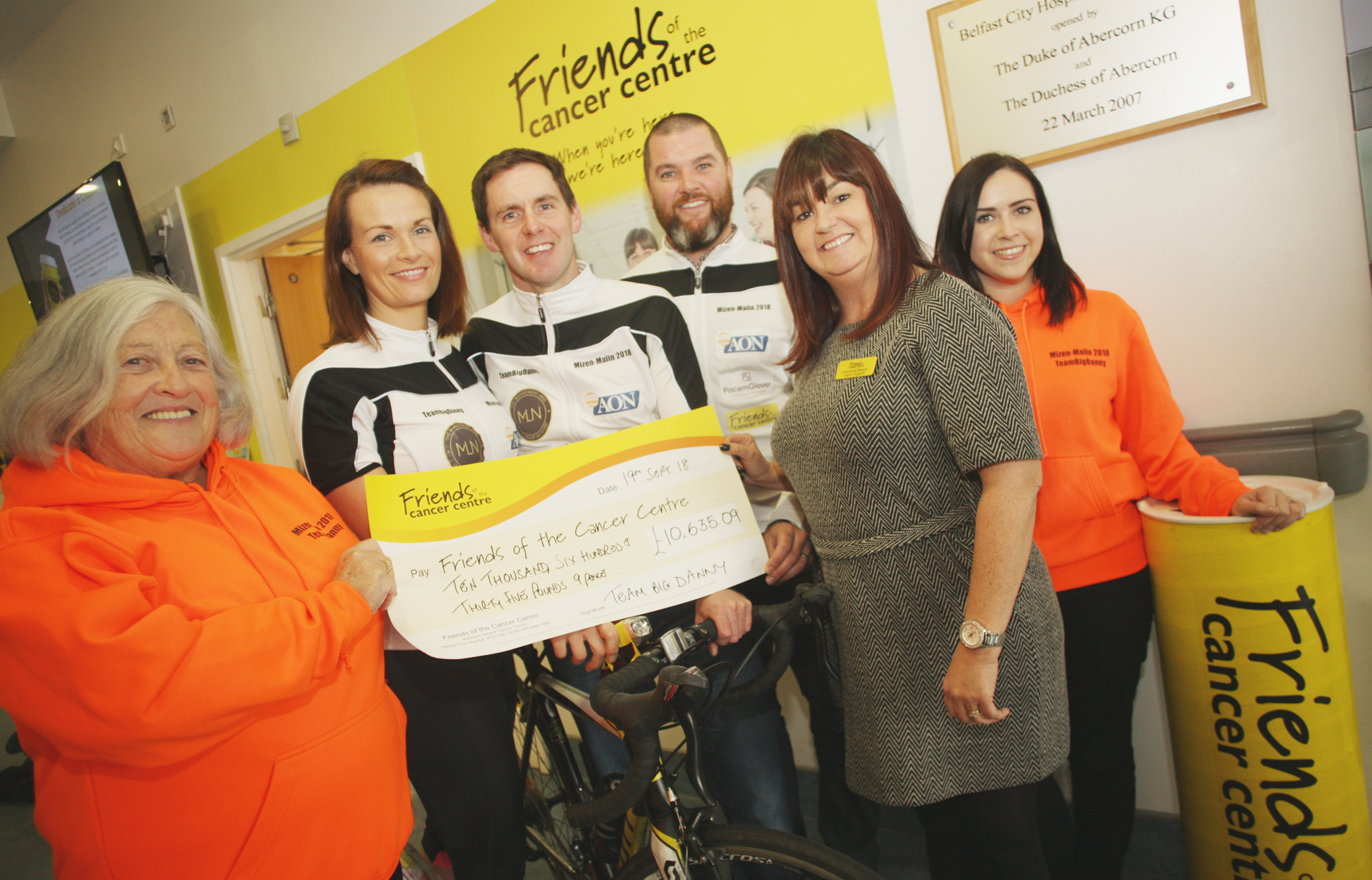 Pacem Glover’s Kevin Kelly and Lizzy Crossan, along with other members of TeamBigDanny, were delighted to hand over a cheque for £10,635 to the Friends of the Cancer Centre Charity at Belfast City Hospital. The money was raised as part of a charity cycle from the most southerly point in Ireland to the most northerly and was in memory of our good friend and client Danny Gallagher who passed away at Christmas.

The cycle was organised by Pacem Glover Partner Kevin Kelly who talked three of his friends into undertaking the challenge. Kevin explains ”We are not great cyclists, in fact we only bought bikes in February, and we’re not a pretty sight in lycra so it was always going to be an interesting 400+ miles up the west coast of Ireland”!

The core cycling team, which consisted of Kevin, Brian Rainey and Gerard Hughes and Gavin Brown set out from Mizen Head in County Cork and, following stops in Kenmare, Kilrush, Oranmore, Drumshambo and Irvinestown, they rolled into Malin Head in County Donegal to a heroes’ welcome six days later.

According to Kevin “It was a fantastic experience and one that will live long in the memory. It was tiring and sore at times but the encouragement and scenery and hospitality (!!) that we enjoyed along the way gave us a great boost”. The team of 4 became 54 when they arrived in Danny Gallagher’s birthplace of Tummery in County Tyrone. Many of Danny’s family and friends from years gone by turned out to see the team off for the final leg and over 50 cyclists made the journey from Mahons Hotel in Irvinestown to the Gallagher Farm in Tummery.  Some 15 cyclists completed the 86 mile final leg from Irvinestown to Malin Head including Danny’s daughter Caitriona and son Daniel neither of whom had ever cycled more than 20 miles on a bike.

Pacem Glover was honoured to sponsor TeamBigDanny and remember our good friend and client Danny Gallagher. Indeed it is in Danny’s memory that we are supporting a host of cancer-related causes during 2018.  Well over 200 people made donations for what is a fantastic cause. Kevin explained that “The Cancer Centre at Belfast City Hospital will touch many of our lives in one way or another. The Friends of the Cancer Centre charity funds life-saving and life-changing projects that make a real and lasting difference to the lives of thousands of local people affected by cancer. During his short illness Danny spoke so highly of the Cancer Centre and the work they do. It has been an honour for us to raise £10,635 for this charity and all of the money will go directly towards patient care, patient comfort and research in the fight against cancer. It is even more of an honour to do it in memory of a great man”.