A cohort of 30 people under the age of 30 has been convened to lead the local response of the younger generation to the climate emergency. In the first of its kind for Northern Ireland and the UK, the class of 2022/23 30 Under 30 Climate Change-Makers was competitively assembled by environmental charity Keep Northern Ireland Beautiful, and supported by Pacem, Pinsent Masons & Danske Bank, in an application process that attracted over 100 submissions from young people from across the country. The group made their introductions on Friday 11 November in a ‘Finance, Economy and Business’ workshop led by business and media commentator Justin Urquhart Stewart and the Belfast-based emissions-data company Catagen. The programme pulls together individuals from an array of backgrounds, including representatives from some of Northern Ireland’s leading public, private and third-sector organisations.

Úna Barrett, a 30 Under 30 participant said, “The changing climate continues to shape our lives immeasurably. The Climate Change-Makers programme has created an invaluable network of like-minded individuals and provided us with a crucial platform for cross-sector collaboration and idea sharing. Being involved in this prestigious programme and meeting my fellow participants has reignited my hope for the future of the planet.”

Jenna Potter, the programme manager at Keep Northern Ireland Beautiful added, “30 Under 30 Climate Change-Makers is a fantastic platform, bringing together our brightest and most climate-engaged individuals who have a passion to make a change. The programme aims to give young people an opportunity for collaboration, connection and the knowledge needed to shape the environmental future of Northern Ireland.”

Founder of Pacem, Daniel Glover explained, “Environmental Sustainability is something that has been at the heart of our business ethos for quite some time and is an area of continuous development. We are delighted to support the 30 Under 30 Climate change makers programme in order to promote positive environment and sustainability outcomes in the wider community. We are looking forward to watch the cohort grow and become the next generation of leaders here in Northern Ireland and further afield”.

Intended as an annual opportunity for anyone who is aged 30 and under and residing in Northern Ireland, 30 Under 30 Northern Ireland Climate Change-Makers was inspired by the Environmental Educators 30 Under 30 initiative that was introduced by the North American Association for Environmental Education in 2016. The programme is delivered by Keep Northern Ireland Beautiful and Podiem, and funded by the Department of Agriculture, Environment and Rural Affairs (DAERA), Pacem, Pinsent Masons and Danske Bank. For more information on the programme and its participant, visit www.keepnorthernirelandbeautiful.org/30under30-ccm

In Defence of Democracies, Markets & the Media

Three prime ministers and three chancellors in as many months, certainly feels chaotic, possibly a bit embarrassing, as well as a little depressing.  There is no doubt that the UK could do with some stability, fiscal rectitude and general leadership. Let’s hope that Rishi Sunak can deliver some. Let us think about the magnitude of what has just happened.  The Conservative party decided, whether rightly or wrongly depending on one’s opinion, that Boris Johnson had to go, fearful of its increasingly appalling polling numbers with the electorate.  A prolonged and uninspiring leadership contest over the long hot summer, ushered in Liz Truss for a fleeting moment before the markets, and again the fear of even worse polling figures, forced her to fall on her sword.  That is all well documented but misses a key point.

What we should be reflecting on is not this mess but the fact that we live in a free, democratic nation, where the government is, as described by Abraham Lincoln in his Gettysburg Address of 1863, ‘of the people, by the people, for the people’.  Living in a society where the ability of the Conservative party to serially partake in the regicide of its leader, in fear of the will of the people, and for voters and opposition parties to freely voice their own opinions, without fear or violence, is a privilege, whatever your political hue.

Contrast that with scenes from the recent Chinese Communist Party Congress of President Xi, a dictator reneging on the established term limits, having an ex-leader humiliated and dragged from proceedings and filling the Politburo with ‘yes’ men, sits in stark contrast.  Political opponents are not just miffed, as they are in the UK, they live in fear of their lives.  Arguing over a pint as to whether there should be a general election, or whether the Conservatives still have a valid mandate, given that it won a majority of 80 at the last election and the UK has a system of parliamentary democracy, is a luxury for those living in a free, stable and open society.

The will of the market, like the people, is a strong democratic force.  Its role is to set prices by incorporating all known information, without fear or favour, to reach an equilibrium price, allowing investors to allocate their capital efficiently.  Liz Truss certainly understood pretty quickly the power of the bond market, as it evaluated her vision for growth against the risks of unfunded tax cuts. The market did not like what it saw and the yield it expected to be paid to lend to the UK government rose, impacting mortgage and other borrowing rates, which in turn was reflected in peoples’ views on her policies.

In an open society the value of a free press is also immeasurable, providing access to information quickly and generally accurately – or at least at risk of fact checking or criticism by other media outlets and commentators – which feeds into both market prices and national opinion.  It looks into dark corners and drives accountability.  For sure, news is a self-selected sub-set of what is going on in the world and more likely to reflect disasters, acts of violence, and thus at risk of portraying a more negative outlook than perhaps truly exists.  We can see in Russia and China what the harmful consequences are of a state-controlled media.  You may not like the Daily Telegraph or the Guardian, depending on which side of the political fence you sit, but to have the choice is, again, something to be valued.

For sure we are in for some tough times economically but remember that at least we live in a society where we are free to express our views, where markets work and the media – however annoying it can sometimes be – helps to hold our politicians’ feet to the fire.   Stay positive!

Pacem Double-Winners at the 2022 Eastside Awards

The much anticipated Eastside Awards, in association with George Best Belfast City Airport, celebrating all that is good about East Belfast, returned in 2022 with a glittering awards ceremony hosted by television presenter Tara Mills. There was double delight for Pacem as we took the titles of ‘Eastside Award for Business Growth’ and the ‘Eastside Awards Employer of the Year’.

The Business Growth Award was open to businesses or social enterprises operating within the East Belfast area that were able to demonstrate growth in terms of business performance and or employment. The award was sponsored by Kainos and there was much joy at the Pacem table when Kainos’ Adam Donnelly announced the we had overcome some very impressive competition to claim the title. According to the judges, this was a very difficult category to judge, and all organisations were commended. Judges were impressed by Pacem’s growth over the last three years in terms of staff numbers, client base and turnover. Our investment in staff training and development was singled out for particular praise.

Having won the previous Eastside Award for Employer of the Year in January 2020 (pre-pandemic) we were especially proud, and humbled, to retain the crown of East Belfast’s Employer of the Year. Entries for this award, which was sponsored by Fleet Financial, were invited from organisations who were able to demonstrate their commitment to and the provision of a positive working environment, especially in the areas of employee engagement, employee development, employee health and well-being and opportunities for growth. Judges commented that the standout for them was Pacem’s consistent, balanced focus and investment on our team’s professional and personal development, captured and managed through our ‘personal development plans’. They also highlighted our financial contribution to staff to fit out a comfortable, functional ‘working from home’ set up during and beyond the Covid-19 crisis.

Another proud night for Team Pacem 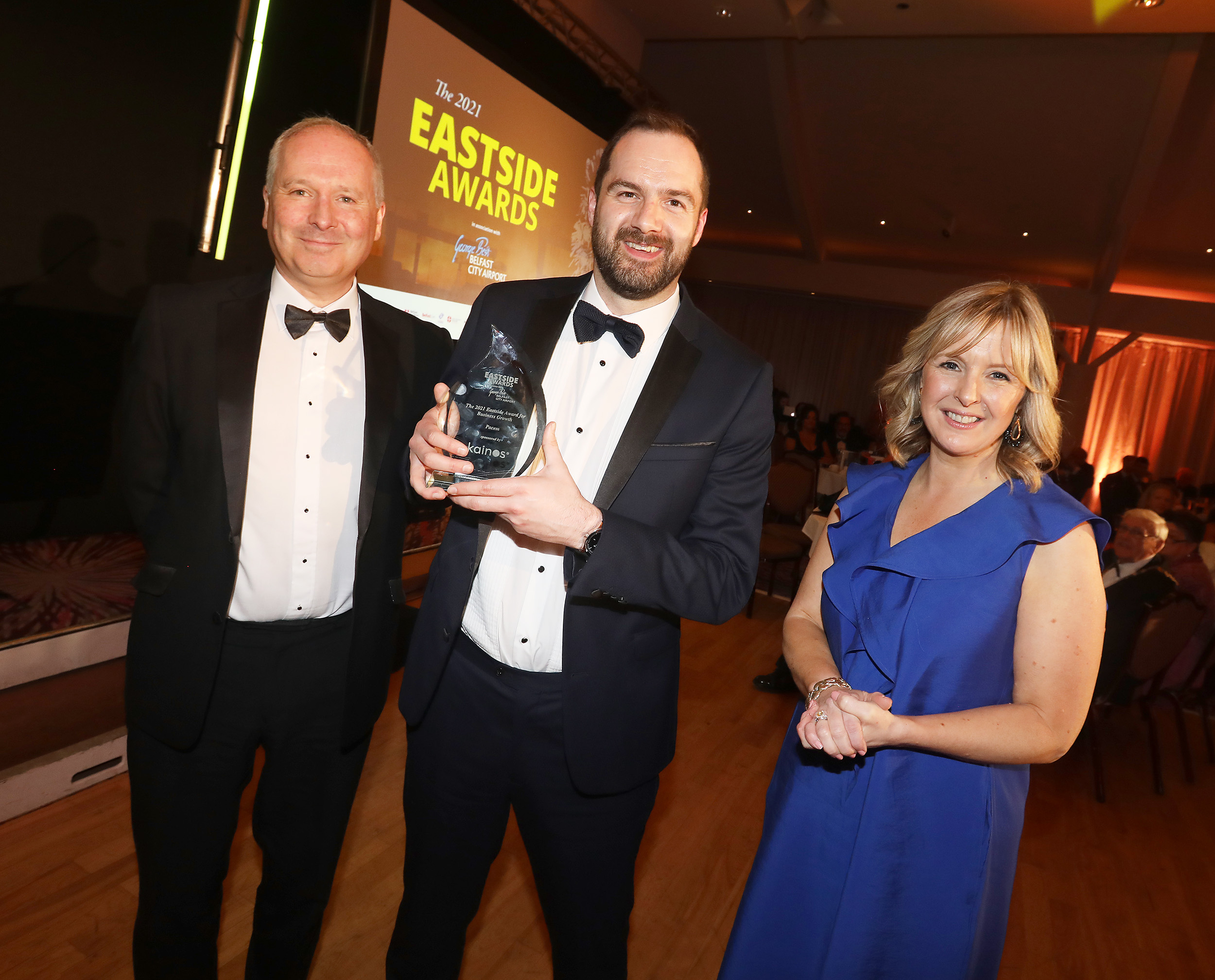 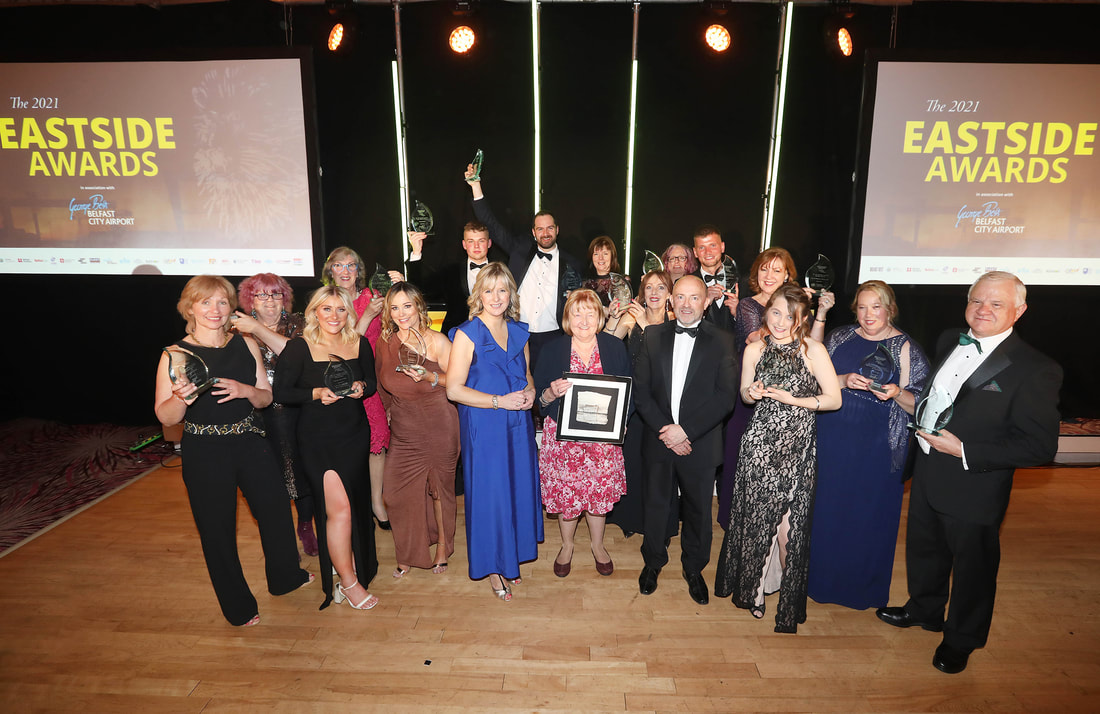