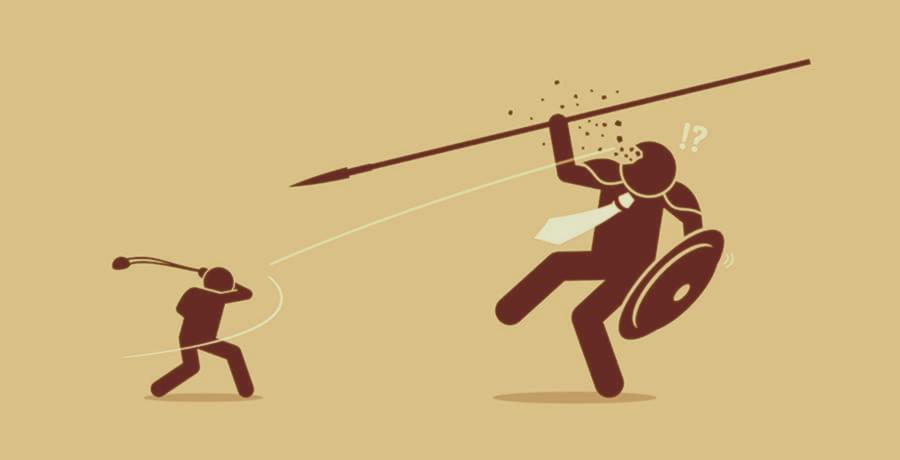 It may have passed you by, but last week a little-known hedge fund called Engine No.1 (David) scored a direct hit with its shareholder slingshot to the forehead of one of the world’s mighty oil companies ExxonMobil (Goliath), stunning its adversary.  Despite only owning 0.02% of ExxonMobil, it put forward a motion at the latter’s AGM to put nominees on the board of directors. It gained two of twelve seats.  Quite a coup.  Its simple rationale was straightforward:

‘We believe that for ExxonMobil to avoid the fate of other once-iconic American companies, it must better position itself for long-term, sustainable value creation’.
Engine No.1 website

In 2010, ExxonMobil was the largest public company in the World, with a value of around US$370 billion, but in 2020 it ignominiously dropped out of the Dow Jones Industrial Average index and today has a value of around US$250 billion.  That is an awful lot of shareholder value destroyed, given how strongly the broad US market has performed. Last year the company made a loss of around US$25 billion, but the CEO still got a pay rise! ‘Go figure’ as our American friends would say.

So how did such a small investor have such a large impact on this behemoth?  Simple. It co-opted major pension investors, such as the California State Retirement System, and the giant fund managers Blackrock and Vanguard – representing the investors in their funds – to vote in its favour.  Ironically perhaps, the Norwegian ‘oil’ fund, which was funded from profits from oil extraction, voted with Engine No.1. It is now one of the world’s leading investors focused on sustainability.

And why would they do that?  In large part because of the growing focus on the climate crisis – and sustainability more broadly – by investors in their funds, who want their voices to be heard. It also comes down to hard-nosed capitalism.  Companies such as Exxon, who appear blind to the train-wreck they face when no-one wants or needs to buy oil, potentially risk losing further value, in some investors’ eyes.  They believe that they can help these oil-tankers to change direction more quickly towards a more sustainable harbour and reap the financial rewards of doing so.  Engine No. 1 was pretty honest about it[1]:

‘Our idea was that this was going to have a positive impact on the share price…What we’re saying is: plan for a world where maybe the world doesn’t need your [oil] barrels.’
Chris James, Engine No.1 Founder (from FT)

Perhaps the key message of Engine No.1’s move is that, even though our individual impact may be small, collectively we can make a difference, through the consumer choices we make and the power of the markets to penalise companies that are out of sync with the values of the day and to reward those who adapt.  From an investment perspective, that means remaining invested in companies in order to have our say, via the fund managers who manage our money.